Much like its neighbour Sainte Foy – La Rosiere is a small, picturesque village resort which is often overlooked for big name resorts in the same area such as Val d’Isere, Tignes & Les Arcs. For those who do venture away from these more popular resorts there is a wonderful chalet-style town with a surprisingly large ski area to be found in La Rosiere.

Sitting at 1850m and up a mountain road from Bourg St Maurice (where the climb also starts to all the afore-mentioned resorts) the village of La Rosiere has been attractively built in a traditional chalet style. Its position on a south-facing plateau means plenty of sun as well as stunning panoramic views over the Isere valley below. The small village centre has a few shops and a friendly, relaxed atmosphere. La Rosiere isn’t particularly aimed at those who enjoy a late-night party, but the restaurant-bars there are can get a little lively and are mostly child-friendly.

The newly-built satellite village of Les Eucherts is approximately a mile further around the mountain from La Rosiere centre. Again, it has been sympathetically built to mingle with the surrounding woods. Much of the accommodation in both areas is ski-in / out, and even those buildings that aren’t on the piste are only a short stroll from the lifts. Children are particularly well catered for in La Rosiere and the range of ski clubs and schools for little ones is better even than in some bigger resorts.

La Rosiere also has the unique distinction of being the only Savoyard resort to be part of an international ski area. The link with the Italian resort of La Thuile just over the border creates the Espace San Bernardo ski area. This adds an extra element to a ski holiday in La Rosiere as it is possible to move freely between France and Italy and enjoy the best of both countries in terms of both skiing and gastronomy.

If you’re looking for a cosy, relaxed village with a traditional feel to it as well as a surprisingly large international ski area then La Rosiere is a great choice.

As previously mentioned, La Rosiere benefits from links with the Italian resort of La Thuile and shares a large skiable area called the Espace San Bernardo. The 150km of slopes fall either side of the French-Italian border and tend to be predominantly intermediate level pistes. However, there are some easier slopes to learn on right next to La Rosiere’s centre, as well as fifteen black runs around the ski area. 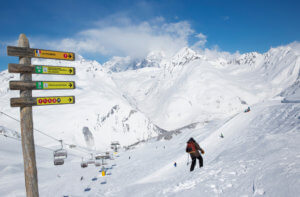 Lifts from the village can be a little on the slow side but the lack of any queues, even at peak times, does serve to balance this out. The South-facing slopes on the French side of the Espace San Bernardo tend to get more sunshine whilst the North-facing slopes on the Italian side get the better snow conditions. Experienced skiers and snowboarders will therefore want to swap between the two countries judging on the day’s conditions.

La Rosiere has always been keen to embrace alternative snow sports and there is the opportunity to try snow-kiting and speed-riding as well as the more traditional activities. Those of an adventurous disposition will also be keen to try heli-skiing over the Italian side as it is banned in French resorts. With a little planning and a little exploration there is plenty of great skiing and snowboarding to be found in La Rosiere with very few crowds, plus a much more economic lift pass price than other similar sized areas.

Great response, really quick, no hassle. Many thanks!

Was easy to book