Built to house athletes and media for the 1992 Winter Olympics in Albertville; La Tania has subsequently developed at a steady rate to provide a lovely ski holiday base. As the resort has spread out it has been built in an attractive chalet style using predominantly local stone and wood cladding. Set in a spruce forest just on the edge of the Courchevel valley, La Tania is an attractive and good value ski village which also has the major benefit of being a part of the huge Three Valleys ski area too. 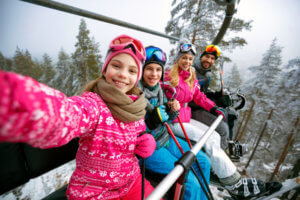 The resort of La Tania has been kept relatively small, and as such it has escaped the over-development and ugly high-rise buildings that have been the fate of other purpose-built French resorts. The attractive centre is traffic-free which has encouraged a family-friendly feel – while also having a selection of much cheaper accommodation than other resorts in this area. Although there are no proper hotels in La Tania the chalets and apartments in town almost all benefit from being ski-in / ski-out and provide a fantastic level of convenience.

La Tania still retains some of the atmosphere from its past as a small hamlet known as ‘the bears dwelling’. You’ll always see a friendly face around the village, and time spent here is likely to be more tranquil and relaxing than almost anywhere else in the French Alps. On the flip-side though – the village amenities can be a little limited. There are still a couple of lively bars in the area though, and all the essentials can be catered for. There are some superb local restaurants in resort as well.

If you’re looking for a ski or snowboard holiday where the emphasis is on relaxation rather than revelry – La Tania could be a perfect base for you. 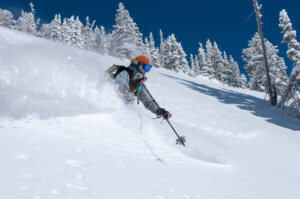 As one of the lowest purpose-built French ski resorts, La Tania relies on excellent snowmaking facilities to keep its local slopes topped up. The area immediately surrounding La Tania resort is varied and features some of the best runs through trees in the Alps thanks to its relatively low altitude. There is a good nursery slope for beginners and kids right in the village, and two friendly ski schools to help those that need lessons. Ending in La Tania are three excellent long, tree-lined runs which are perfect to finish the day with.

Of course, for more advanced skiers and snowboarders the best thing about skiing in La Tania is that it is part of the world famous Three Valleys (or Trois Vallees) ski area. With 600km of pisted runs throughout this huge interconnected area there is something to keep every level of skier entertained. La Tania has excellent connections to the wider area as well – with holidaymakers staying here being only 2 lifts away from either Meribel or Courchevel. From here the whole of the Three Valleys is accessible using the efficient ski lift system, and that terrain will keep even the fastest skier going for quite some time.

Simple, easy to use, great prices

Easy to use and timesaver

Great site to find alternatives, Used it to book transfers, easy process and good followup and confirmation. Provided a broader range of alternatives and pricing.